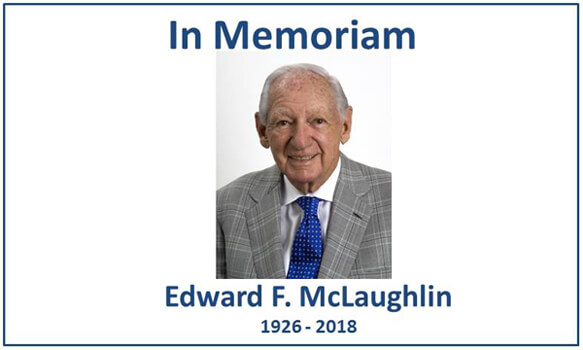 Ed lived a full and active life. He began his career in radio in 1958 as a salesman for an Oakland radio station. In 1964, ABC hired him as general sales manager for KGO/San Francisco, one of the area’s first news/talk stations where he became general manager in 1966.

In 1972, ABC transferred Mr. McLaughlin to New York to become president of ABC Radio Networks. During his 14-year tenure, he greatly increased the number of ABC affiliates and purchased Watermark, a radio syndication company.

In 1987, Ed founded EFM Radio, a production company devoted to talk radio and, in 1988, he produced the Rush Limbaugh Show. By 1990, this daytime talk show on political issues had become a fixture on more than 200 stations, ultimately airing on more than 500 stations. Through EFM Radio, he also produced and syndicated the “Dr. Dean Edell Show,” a medical talk show that airs on more than 400 stations.

In 1998, he became chairman of the board at Broadcaster’s Foundation, an organization devoted to helping broadcasters in need. He was also a trustee emeritus of Paley Center for Media and was inducted into the Radio Hall of Fame in 1995.

Ed was an active Civic Association director and a prominent community figure. He loved Palm Beach and enthusiastically supported the Association’s efforts to protect and improve the Town. We will miss him greatly. We extend our deepest sympathies to his wife,