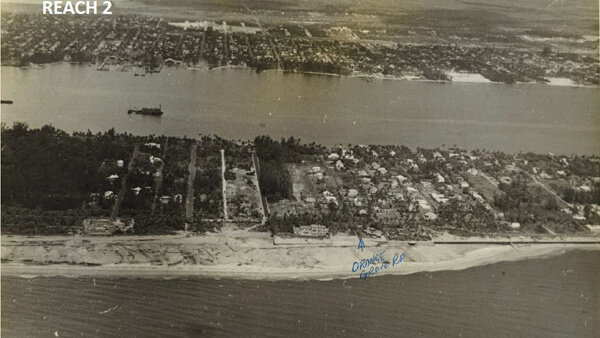 1948 was a notable year for the Civic Association.  Growth, zoning, beach erosion, and gambling were the big issues.

First up was growth.  Civic Association members were concerned with the explosive growth that post-war America was bringing to Palm Beach County.

The association issued a statement putting itself on record as opposing changes in the zoning laws established the previous year. This was in response to “a score of applications filed asking relaxation of zoning restrictions in almost every area of the town.”  The property owners of Palm Beach should not be forced to spend a great deal of time and money every year to defend and protect their interests against encroachment,” the statement said.  The residents don’t want the town to change into “an overcrowded commercial resort,” it said. – March 7, 1948, Palm Beach Post

William G. Cluett, new chairman for Beach Erosion for the Civic Association, advocated further investigation on responsibility for the upkeep of groins.  Note the photo is of Reach 2 in 1948.

In December, the Palm Beach Post reported that the Civic Association wrote to the town’s and county’s law enforcement agencies mentioning “frequent and disturbing” rumors regarding possible organized gambling in the “resort” and that they are “unalterably opposed” to gambling in town. Dec. 3, 1948, the Civic Association board of directors passed a resolution opposed to any and all forms of gambling with the town.

According to the December 19, 1948 Palm Beach Post, the Civic Association has 304 members and holds three membership meetings each season. Their motto is “Keep Palm Beach, Palm Beach.”