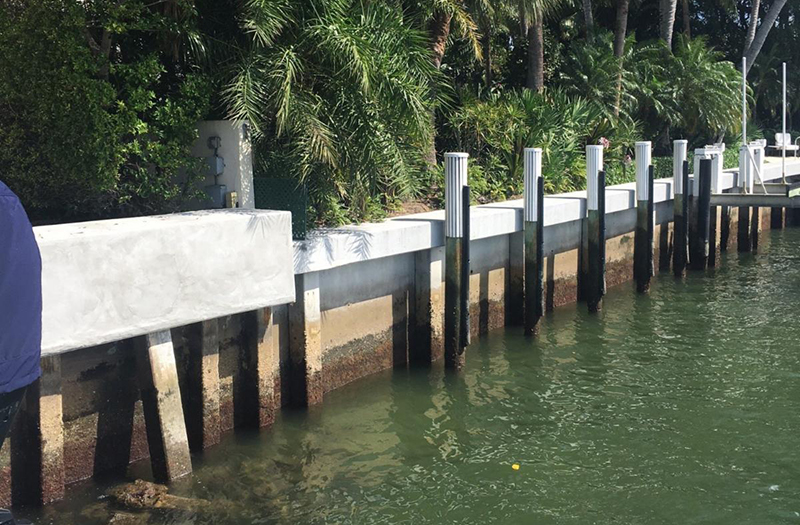 Picture: North End resident Bob Holuba, whose property faces the Intracoastal Waterway, recently rebuilt his sea wall and elevated the concrete cap by 18 inches after the previous wall was compromised by flooding during Hurricane Irma in 2017.

Palm Beach dodged the full fury of Hurricane Irma in 2017. The storm, which began as a powerful Category 5 hurricane, veered away from the island, which suffered minimal damage compared to Miami and the Florida Keys.

But it was still a wake-up call for residents like Bob Holuba, whose home faces the Lake Worth Lagoon in the upper North End. The storm whipped a southwesterly wind across the lake, onto Palm Beach’s western shore, and over Holuba’s seawall.

“The winds were so strong my backyard flooded with lake water,” he said. “This was not a storm surge. This was 75-mph winds lifting the surface of the lake and blowing it like a tornado into my yard.”

The pressure of the water that accumulated behind the seawall caused it to tilt and, in one place, shifted it by two inches, he said.

“I elected to dike myself higher to mitigate against rising seas and wind-blown water flooding my yard,” he said. “Connected to my two sidewalls, it creates somewhat of a fortress.”

When faced with a potentially catastrophic event, you can either react or retreat, said Holuba, who is chairman of the Palm Beach Civic Association’s Port of Palm Beach/Peanut Island Committee.

“I am not ready to retreat to higher elevations,” he said. “But I can mitigate against what is a certainty: rising sea levels and weather events. It seems like every year we are having these so-called 100-year weather events somewhere on the globe. Mother Nature is on a very active course.”

Bob Wright, chairman and CEO of the Civic Association, lives on a lakeside lot next door to Holuba.

Wright’s property was damaged from flooding during the hurricanes that hit Palm Beach in 2004 and 2005 – Frances, Jeanne and Wilma. His seawall was in good shape because he had rebuilt it. But he said the wind drove the lake water right over the top.

Wright’s landscaping was wiped out and his swimming pool filled with mud. “It cost me hundreds of thousands of dollars,” he said. “You really can’t insure your plants and trees, it’s so expensive.”

The town’s coastal protection program has for many years focused on nourishing the beaches and maintaining the dunes to protect upland properties along its Atlantic Ocean beaches.

But that perspective is changing along with the warming climate and more frequent flooding triggered by higher ocean levels and rising temperatures across the globe. In the last decade, the town has witnessed significant increases in flooding of the Lake Trail on its western shore, especially during the king high tides.

There seems to be greater awareness about flood vulnerability on the lakeside.
“The lakeside of the island is vulnerable to earlier flooding because the property elevations are generally lower than on the ocean side, and we don’t have seawalls along certain sections of the lakeside,” said Keith Beaty, a lakeside resident and member of the Palm Beach Civic Association’s Executive Committee.

Town consultant Woods Hole Group, an international environmental services firm based in Massachusetts, delivered a flood risk report in 2019 after spending two years assessing the town’s vulnerabilities on both of its coasts. The firm is due to return with a flood defense plan later this year.

But the town hasn’t been sitting still. It is raising seawall elevations on its properties whenever the opportunity presents, Public Works Director Paul Brazil said.

The seawall cap is being raised about 2 feet higher, to elevation 5.3 feet, as part of the seawall replacement at Lakeside Park beside the new Town Marina, which is due to open in November.

The town also is designing a replacement of the seawall at Midtown Beach. The top of the cap will be about 2 feet higher, at an elevation of 15.8 feet, he said.

What’s more, the seawalls at both locations are being built to accommodate additional height if needed in the future, Brazil said.

The seawall at Bradley Park is old and deteriorating and needs to be replaced at a higher elevation, Brazil said. Brazil has suggested to the Shore Protection Board a more environmentally friendly approach that may include new mangrove plantings beside the new wall to help prevent or limit flooding.

The Garden Club of Palm Beach recently donated a tidal garden, with native plants and a new drainage system, in the park to redirect rising flood waters during king tides.

New properties and existing properties renovated beyond a 50 percent threshold are required to raise the elevation on their seawalls, he said. Higher seawalls offer better protection against tidal flooding and storm surges, but they don’t prevent flooding in lower-elevation areas when water rises up through the ground.

So raising the elevation of your seawall, if you have one, is the right thing to do, but it’s not the only thing to do, he said.

The building ground-floor elevation, ground-surface elevation, water-table elevation, and seawall elevation are all factors that must be weighed, he said.

“Some of the long-term solutions for resiliency include not just public property but private property as well,” Brazil said. “These will lead to policy decisions for the Town Council.”

The town’s new Morton and Barbara Mandel Recreation Center, which opened in December 2019, replaced an older recreation center that was built in the mid-1980s.

The old center could not have been restored because the ground floor elevation was too low, at only 3.5 feet above sea level, said Michael Ainslie, chairman of the Planning and Zoning Commission.

The new center was built at an elevation of six feet. “The new facility is much higher and safer,” Ainslie said.

Ainslie said the broader question facing the town will be how to address minimum elevation requirements as part of a zoning code review during the next 18 months.

“It’s complicated, because you have existing homes at lower elevations and new homes that are going to have to be built at a higher elevation on adjoining properties,” Ainslie said. “It’s going to be a challenge for the writers of the code and the architects designing these houses. How do you do that in such a way that the new houses don’t stick out higher and look ungainly and inappropriate next to the older houses? It’s a problem every community on the coast is dealing with. We are not unique.”

Elevation requirements are defined as FEMA’s base flood elevation plus one foot, and they vary by location throughout town, Zoning Director Wayne Bergman said.

Properties near the ocean or another body of water are more likely to suffer damage during a storm. To quantify the risk, FEMA categorizes communities that have a higher risk of flooding into one of several flood zones. Nearly half of the homes in Palm Beach are in special flood hazard areas.

Despite rebuilding his seawall and elevating the cap height, Holuba said his homeowners’ insurance, including hurricane coverage, continues to go up 20 percent annually.

The NFIP allows owners to insure their homes against flood damage for up to $250,000, and up to $100,000 for belongings. For non-residential property, you can buy up to $500,000 of coverage for the building and contents.

Holuba said that’s not much flood insurance for homes and buildings in a place like Palm Beach, where values reach into millions or tens of millions of dollars.

“Insuring these multi-million-dollar oceanfront or waterfront properties in Florida is an increasingly difficult and expensive exercise in Florida,” Holuba said. “The insurance companies don’t want to write the policies at all. It’s only going to get worse.”