Our Town with William Kelly: Landmarks board embraces playhouse renovation 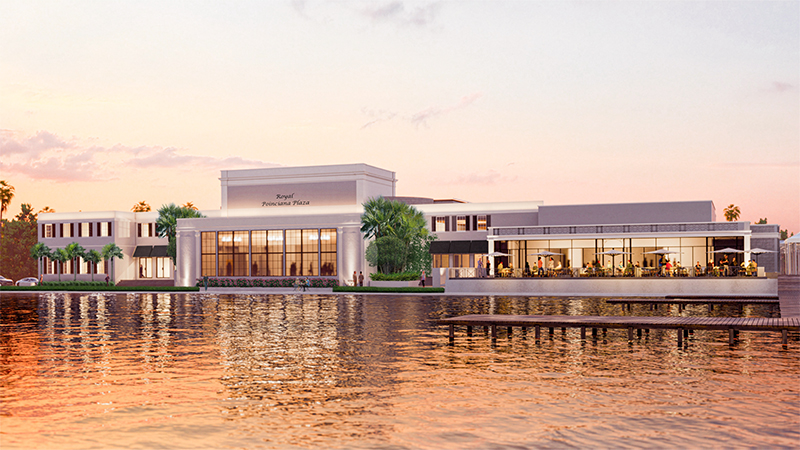 A plan to renovate and reopen the long-shuttered Royal Poinciana Playhouse sailed through the Landmarks Preservation Commission on Wednesday with a unanimous vote of approval.

“This will be an entry to Palm Beach that is worthy of our town,” said outgoing Chairman Rene Silvin, referring to the playhouse’s high-profile, waterfront location beside the east landing of the Flagler Memorial Bridge.

“You needed to do something creative, and you’ve done that,” Silvin told Alexandra Clark and other representatives of Massachusetts-based WS Development, the project developer.

Clark is vice president of asset strategy and experience at WS Development, the parent company of Up Markets, which manages the Royal Poinciana Plaza and Playhouse under a long-term lease.

Clark said the project team has spent seven years diligently and patiently searching for the right operator to make the project a long-term success. Progress was slow and painstaking with plenty of stops and starts. Throughout it all, Clark made 14 progress updates to the Town Council – often with little if any progress to report.

The plan calls for the redevelopment of the 860-seat playhouse into a cultural arts venue with up to 400 seats and a stage with a retractable backdrop wall, enabling the space to transform into an “alfresco waterfront event venue,” according to WS Development. Auditorium seating would be collapsible instead of fixed so it could be adjusted for flexibility of use. The lobby and box office would remain intact.

The vacant “celebrity room” space on the south side of the building would be renovated into a 200-seat restaurant with waterfront dining, a rarity in Palm Beach.

An additional 8,000 square feet would be added to the existing 34,500 square-foot building as part of the plan to create a total of 12,000 square feet of retail and gallery space.

INNOVATE, a publicly held company chaired by Palm Beach resident Avram “Avie” Glazer, would operate the programming for the cultural arts center. Glazer and his family are owners of the Tampa Bay Buccaneers and Avie Glazer is co-chairman of the United Kingdom’s Manchester United Football Club.

Glazer said he and his wife Jill have met with representatives of local cultural institutions that have no permanent venue to call home. “The feedback has been positive,” he said.

The Glazers have lived in Palm Beach for 20 years. Throughout that time, the playhouse languished in the dark.

“A full generation of Palm Beach residents have heard about the playhouse and seen it but never had a chance to experience it,” he said. “It’s time to turn the lights back on.”

The playhouse was designed by architect John Volk, who added the regency-style structure to the Royal Poinciana Plaza’s footprint in 1958 with the intention of creating a community center for the island.

The venue hosted Broadway plays, ballets and musical performances, all enhanced with the regalia of nightly dinners and dancing in the adjacent celebrity room.

But the last tenant, Clear Channel Communications, pulled out in 2004, saying it was no longer viable as a Broadway show road house. The debate over the future of the landmarked building has stirred ever since.

Silvin said the landmarks commission has received 30 letters from individuals and organizations, including The Breakers, Palm Beach Chamber of Commerce and Palm Beach Civic Association, registering their support for the revitalization plan.

That was followed by enthusiastic praise at Wednesday’s meeting from the public, including neighbors, plaza vendors and civic leaders.

“This is a momentous occasion, to have the rehabilitation plans of the playhouse before you today,” Amanda Skier, president and CEO of the Preservation Foundation of Palm Beach, told the commission.

After taking the reins of the Royal Poinciana Plaza seven years ago, Up Markets/WS Development rapidly orchestrated a dramatic revival of the long-fading shopping center, filling it with vibrant upscale shops and restaurants. That rebirth is a strong indicator of its ability to transform the playhouse into another success story, Skier said.

Aimee Sunny, the preservation foundation’s director of education, said it shared architectural drawings with Clark and her team to help them incorporate lost elements of Volk’s original vision and design.

“We are thrilled to see the long-overdue revitalization of a quintessential Palm Beach landmark that John Volk designed,” Sunny said. “We recognize this is an adaptive re-use project balancing historic character with modern function and needs. The alterations still retain the character and significance of this building.”

Laurel Baker, chief executive officer of the Palm Beach Chamber of Commerce, praised the plaza management for coming up with a plan that adapts the playhouse for the 21st century. “Perseverance pays off,” she said.

The proposal must be approved by the council, which is expected to consider it on March 9 for a site plan review, special exception use and zoning variances. With approval, the new venue could be built in time for a late 2023 opening, Clark has said.

Nearly all of the existing building would be demolished. Key historical and architectural elements, such as the east facade, would be preserved and incorporated into the new building, which Clark said will be more faithful to Volk’s original and more symmetrical vision.

“Many will agree that it’s not the most beautiful building today,” Clark said.

Richard Sammons, local architect and an alternate member of the Architectural Commission, agreed that the existing structure, with its windowless west facade on the waterfront, is no architectural treasure.

“The playhouse is not Monticello,” he said. “This [plan] is exactly what one probably should do. From an architectural standpoint, this is a vast improvement. It’s exactly right.”

Nico Freijomel, senior project architect with Spina O’ Rourke + Partners in West Palm Beach, said the architectural team focused on recreating elements of Volk’s original design, which called for linking the playhouse more closely with the remainder of the plaza.

The renovation plan calls for preserving the east facade with the four statues at the top, the box office and the main entrance, which would be opened up to the waterfront for the first time, Freijomel said.

The five arched windows on the east facade would be lowered to the finished floor elevation, he said. Volk’s original plan for a canopy at the main entrance would be realized.

The mural on the ceiling in the celebrity room would also be preserved, Freijomel said.

“It was important to us as architects to study the original design elements and keep the playhouse as the star of the show,” he said.

Parking and the service entrance would be on the north side of the building. The valet service drop would be on the south side. A traffic impact study has been performed and submitted to the town.

Sue Patterson, vice chair of the landmarks commission, said she agrees that the new design will be superior to the existing structure.

It will be exciting, she said, for Palm Beach to have a thriving cultural arts venue once more.

“Thank God for the Glazers,” Patterson said. “This sat empty for so many years because it is such a monumental undertaking. It’s going to be great for families and amazing for the arts.”