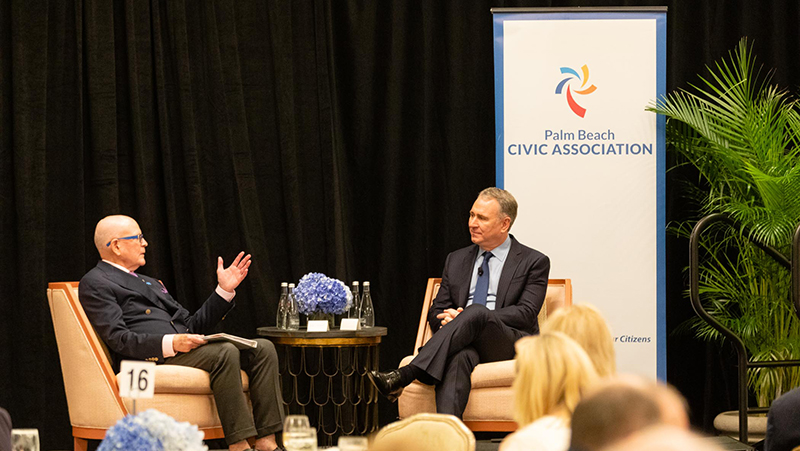 The hedge-fund billionaire told a Palm Beach Civic Association audience that entrepreneurship is the key to American dominance.

Education is crucial for America if it is to maintain its competitive edge with China, hedge-fund manager and investor Ken Griffin said at a Palm Beach Civic Association luncheon on Thursday.

More American students must pursue careers in science and technology or the United States will lose its commanding position in the global economy, Griffin told an audience of 225 people at the Four Seasons Palm Beach Resort.

China outpaces the United States by a ratio of four-to-one in the number of graduates in the science and technology fields, he said.

“There is unquestionably a false sense of security in Washington that we are almost predestined to lead the world,” he said. “We’re really good at entrepreneurship – at finding entrepreneurs. But that gap is closing.”

The United States must do more to encourage interest in those areas, he said. “Why is it that only our athletes are heroes in America?”

Griffin is founder and CEO of Chicago-based hedge fund Citadel LLC, which manages more than $43 billion in capital from its partners.

He also is a prominent philanthropist, having given $1.3 billion for the education, the arts and urban renewal.
“The vast majority of money I contribute is in education,” he said. “That is the future of this country.”

Griffin, a Florida native who has a vacation home in Palm Beach, donated $20 million in 2018 to the Norton Museum of Art – the largest gift in the museum’s history – toward its renovation and expansion and to endow the museum director’s position.

Other beneficiaries of Griffin’s philanthropy include the University of Chicago, the Ann & Robert Lurie Children’s Hospital, the Museum of Modern Art and the American Museum of Natural History.

“Great cities are anchored by our cultural institutions,” he said. “The arts [nurture] us all and help bring communities together.”

Griffin’s remarks occurred in an interview format, with Bob Wright, the civic association’s chairman and CEO, asking the questions. Wright asked Griffin about his recent purchase of the last privately held copy of the U.S. Constitution. Griffin outbid a group of cryptocurrency investors to buy the rare first printing of the document for $43.2 million at Sotheby’s auction house.

“It’s from a sense of reverence for what our founding fathers did,” Griffin said. “They said, ‘We’re going to be a free nation, not under the thumb of a king.’ There is only one nation in the world that rose above authoritarian reality.”

Griffin, 52, began trading stocks while at Harvard in the 1980s and founded Citadel in 1990. He credited much of his success to the rise to technology in the 1990s and early 2000s that revolutionized how securities were priced and traded.

“I’ve stumbled many times,” he said. “I picked a career where almost half the time I’m wrong. You’d never go to a brain surgeon who does the job wrong half the time.”

Griffin has purchased more than 20 acres in Palm Beach and owns the largest stretch of vacant ocean-to-lake property on the island. He got a big laugh from the audience after Wright asked him what he plans to do with all that land.

Griffin was originally scheduled to speak at a civic association event on March 17, 2020, but that engagement was postponed because of the global pandemic. The location of Thursday’s event at the Four Seasons, where the pandemic was part of his discussion with Wright, seemed apropos.

In the early weeks of the pandemic, Griffin and his team leased the entire Four Seasons site for use as a remote trading floor for Citadel Securities, a stock trading company separate from the hedge fund. Citadel Securities trades in more than 35 countries and makes about 25 percent of America’s stock trades each day, he said.

Griffin and his team chose the Four Seasons because while scrambling to find a safe place to conduct business. They were there for about seven months. 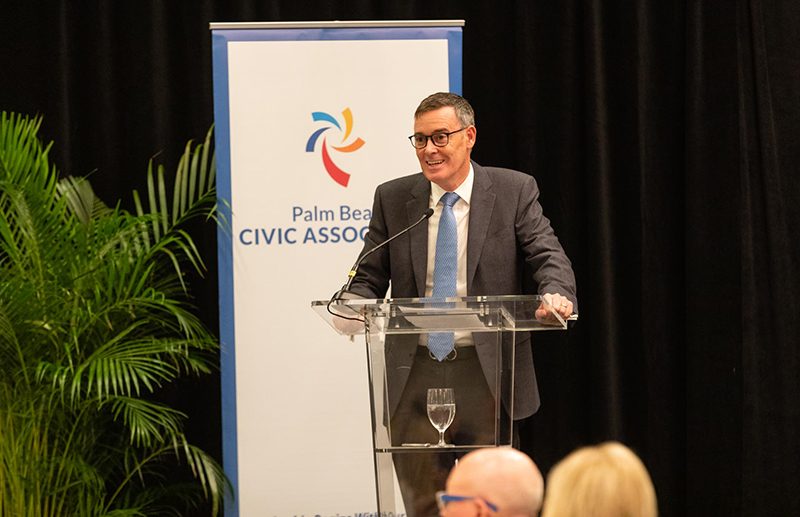