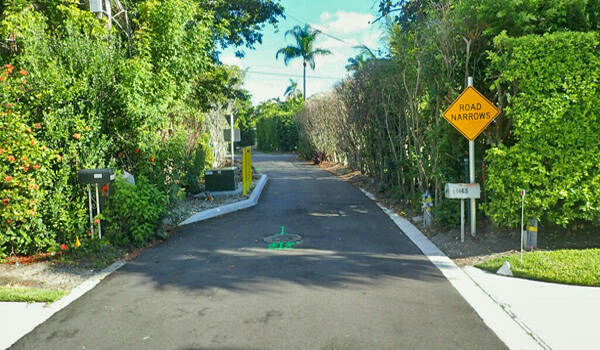 By Michele Dargan, Special for the Civic Association — Town Engineer Patricia Strayer told members of the Town Council Tuesday that there are three streets remaining in the north end where the town was unable to secure homeowners’ permission to install undergrounding transformers on their properties.

If no homeowner in those locations will allow a transformer, then the town will have to extend out a section of the curb into the road and place the transformer there, she said. The piece of curb that extends into the roadway is called a chicane and narrows the road to one-lane at that spot.

The three sites remaining are located on Esplanade Way, Reef Road, and Angler Ave, Ms. Strayer said. The cost of each chicane is $20,000 extra, she said.

“None of us want chicanes,” she said. “We have looked at alternative placement. We have tried to move the transformers to a number of different places to avoid a chicane. We will continue to work with residents…We still have a couple of months before we absolutely have to put the chicane in.”

The Undergrounding Task Force last week recommended painting an outline of the chicane on the roadway so that residents can see what it will look like, Ms. Strayer said.

Project Manager Steven Stern said that within minutes after painting the lines on the road, they received calls from residents wanting to find a solution. There are conversations scheduled with residents on Reef Road and Angler Ave., but they haven’t had a response from anyone on Esplanade Way, he said.

Councilwoman Maggie Zeidman said, “Obviously the chicane goes in only when you’re between a rock and a hard place.”
Council President Danielle Moore said she has heard from parents with young children who were not opposed to the chicanes because it will slow traffic and increase safety.

“I agree that these things do not have to look awful,” said Councilman Lew Crampton. “They turn out to be traffic calming measures and that can be a positive in the neighborhood.”

Project Manager Steven Stern said that they are striving to improve communications with residents for phase two and have completed a mail campaign regarding any type of right-of-way equipment placements. The town will answer any of the residents’ questions now instead of after it happens, so that there will be no surprises, he said.

Town Manager Kirk Blouin said that – going forward – the task force, the council and the homeowners will be notified if a chicane is needed well in advance.

In other undergrounding news: Mr. Stern reported to the council that the town will be conducting informative meetings for residents at Town Hall on Nov. 29 from 3-5p.m. and Jan. 23 3-5 p.m.

Phase one north and south are a little behind schedule due to renegotiations with service providers. Light pole installation is expected to be completed by Nov. 1 and April is the expected target date for power pole removal.