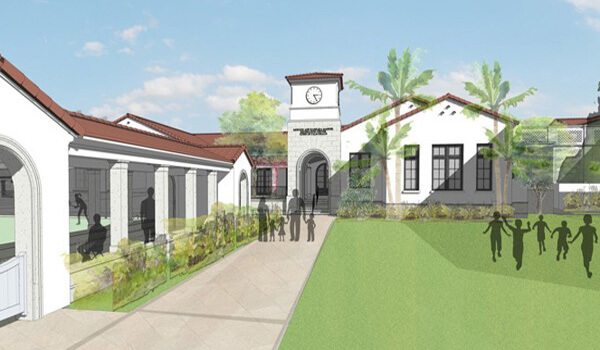 After four hours of sometimes contentious discussion, the Town Council on Tuesday awarded the construction contract for the new recreation center to Hedrick Brothers by a 3-1 vote.

The guaranteed maximum price for work performed by Hedrick Brothers Construction is $11.6 million with the overall project budget being $13.8 million.

Councilman Lew Crampton recused himself from voting because he is president of the South Florida Science Center and Aquarium and Dale Hedrick, founder and president of Hedrick Brothers Construction, is on the board.

“Dale has nothing to do with my compensation,” Mr. Crampton said. “I’m confident I can vote on this without any bias. However, out of an abundance of caution, I’m going to recuse myself from this vote.”

The council ratified the amended Friends of Recreation (FOR) agreement to reflect their portion as being $4.6 million.

Mr. Ainslie noted that, if passed, the project would be two-thirds funded by private donations of $9.2 million, making it an historic day.

“Palm Beach will be the envy of towns across America, seeing its citizens so committed to its future well-being,” Mr. Ainslie said. “To raise $4.6 million before a shovel has turned is stunning.”

At last month’s council meeting, Ms. Araskog said she wasn’t comfortable approving the project without having all the pledges from FOR on hand or having some type of legal assurance that would secure the pledges.

Mr. Ainslie said they will have all of the $4.6 million in their account at Northern Trust Bank by Wednesday, because they have borrowed the money up front for the donor pledges. The interest per month on that loan is about $8,000 to $9,000 a month, he said.

“We thank you and should give you extra credit for what you’ve done for this project,” Mr. Crampton said.

Mr. Ainslie thanked a list of people and businesses who have helped FOR along the way, including FOR Chairman Matthew Smith and the Mandels.

“Deputy Town Manager Jay Boodheshwar outlined the scope of work that Hedrick Brothers will perform, including: the demolition and reconstruction of the recreation center, the multi-purpose field, the playground, the outdoor basketball court, the elimination of the tennis pavilion structure, a new playground pavilion structure, a new tennis hitting wall, an entry arch and renovations to the tennis pro shop and maintenance storage building.”

“Our guaranteed price includes everything,” Mr. Hedrick said. “If we don’t spend the money, you get it back.”

Over the course of the four-hour meeting, Ms. Araskog voiced concerns that included the size and scope of the project and that the council hasn’t worked as well with the residents as it could have. She was also concerned about the project coming up for approval during the summer months when many residents are gone and that the plans are not going to ARCOM before getting approval from the Town Council.

Ms. Araskog also wanted to receive confirmation that the full amount of $4.6 million was FOR’s bank account on Wednesday.

Mayor Gail Coniglio pointed out that the reason the project has been delayed for a year is because of a lawsuit filed against the town by people who were against the project.

“We’re here today because of the year delay of the litigation,” Mayor Coniglio said. “It has cost this project $96,000 in litigation cost, plus an additional 20 percent more in construction costs, based on the fact that construction costs have gone up.”

Mayor Coniglio said that the funding distribution for each of the three parties went from $3.7 million to $4.6 million because of the delay in construction and cost increases. If the council had not approved this project, then the town would have been obligated to pay back the up-front cost given by the donors, which totaled $1 million, and the town would have gotten nothing in return.

Resident Peggy Moore said she thinks the project is too big. She said the tennis is important, but the project doesn’t need the game room, the pro shop, or the snack shop.

“We just want things done in good taste,” she said. “We don’t glitter it up. … We have fewer children here than five years ago. West Palm Beach is for the younger. Let them have the rec center there.”

Mayor Coniglio said, “We need to keep the town vital for the future. To me, it’s important we improve our cultural and recreational opportunities for families. We have donors who are deep in the community. I think the Friends of Recreation has done a phenomenal job.”