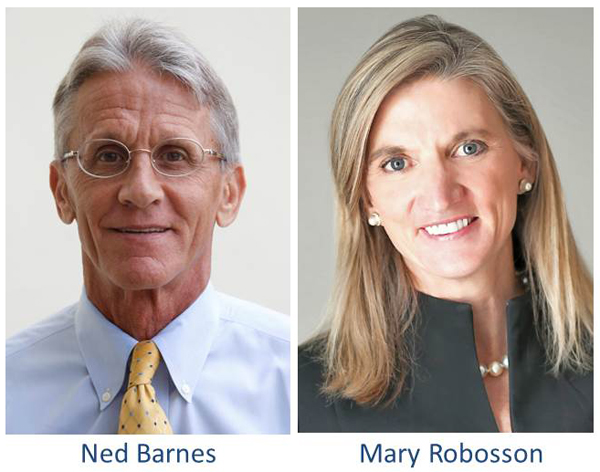 Ned Barnes, president of the Palm Beach Civic Association, will retire on September 1 after 26 years with the organization.
The association hired Mr. Barnes as executive director in October 1993 and later appointed him president.

Chairman and CEO Bob Wright announced on Thursday that Mary Robosson will succeed Mr. Barnes as president. As the organization enters its 76th season, she becomes the first woman to hold that title.

“What a wonderful choice,” said Palm Beach Town Council President Danielle Moore. “I’ve known Mary a long time. She’s a great person and is well respected in town. She has a terrific background and she’s knowledgeable about the town and the players. Ned has accomplished so much and I’m sorry he’s retiring, but Mary is wonderful. I think it’s exciting for the organization to have the first woman president.”

Ms. Robosson has lived and worked in the Palm Beach community for more than 30 years. As the Civic Association’s vice president since 2017, she has overseen the organization’s fundraising and membership growth, and anticipates continued success for the organization and its impact on the local community.

Mr. Barnes announced his plans to the Civic Association Executive Committee in a June 10 letter.

“When I look at the Civic Association, it appears to me that this is the perfect time for me to step aside,” Mr. Barnes said in his letter. “The association is booming like never before, exceptional leadership and staff are in place, and another amazing season is about to unfold.

“I am forever grateful to each of you for your support and friendship over many years,” he said. “It’s been such a wonderful experience for me to work with you for the good of the community. I thank you for giving me the opportunity to serve this outstanding organization.”

Ms. Robosson said, “I’ve had the great fortune of knowing Ned Barnes and the Civic Association for more than 25 years, working directly with Ned for the past two years. I’ve also had the distinct pleasure of working for Bob Wright with Autism Speaks and The Suzanne Wright Foundation. I’m extremely grateful and honored to have this opportunity. I have big shoes to fill with Ned retiring, and I look forward to carrying the torch to further our mission with so many great leaders who serve the Civic Association as directors and members. It’s a brilliant group of people, individually and collectively.

“The Civic Association members and our Committees are our greatest asset,” she said. “We are uniquely positioned to serve our community in the most compelling ways, as conveners to protect and preserve the Town of Palm Beach. I’m looking forward to the 76th season.”

Ms. Robosson formerly served as vice president for the Suzanne Wright Foundation and director of philanthropy for Autism Speaks and vice president of philanthropy for Palm Healthcare Foundation. She was the principal of Philanthropy | Strategic Marketing, a consulting firm that specialized in fundraising, which included restoration works of the Vatican Museums. Previous positions include senior director of development for Palm Beach Opera from 2004 – 2007, and for the Kravis Center from its grand opening through 2004. Ms. Robosson also served as the marketing manager for the PGA of America’s Seniors’ Championship.

Originally from Pittsburgh, Ms. Robosson is an accomplished golfer and played collegiate golf at the University of Edinburgh in Scotland. In her spare time, she enjoys playing golf and tennis and spending time with her daughter, a senior at Loyola University of Chicago.

Palm Beach Mayor Gail Coniglio said, “The organization has flourished under Ned’s leadership and he will be sorely missed. We are excited for him to start a new adventure and will embrace Mary Robosson as the next leader. It’s the pinnacle of the 75th year anniversary celebration by bringing a woman onboard for the 76th year.”

The mission of the Civic Association is to protect and improve the quality of life in Palm Beach by taking proactive stands on civic affairs, educating and engaging residents on key town issues, working with local government, and encouraging citizen involvement in the community.

To learn more about the Civic Association, visit palmbeachcivic.org or call 561-655-0820.