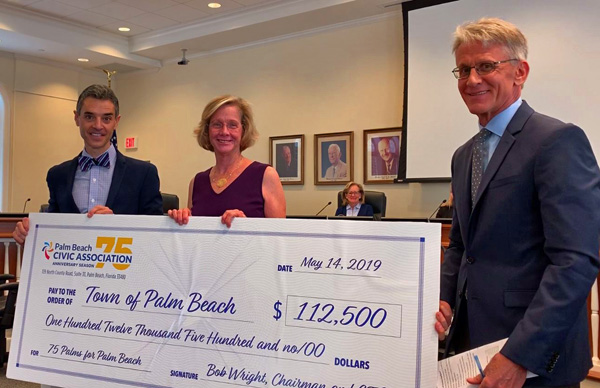 Palm Beach Civic Association President Ned Barnes and Beautification Committee Chairman John David Corey, a Civic Association Director, presented a check to the Town Council Tuesday for $112,500 that will be used to purchase 75 coconut palms for the town.

The gift is in honor of the Civic Association’s 75th anniversary season. The association raised the money through donations in 3 ½ weeks, Mr. Corey said.

A portion of the money will be used to fund a five-year endowment to pay for maintenance on the trees. The endowment was requested by the council in October, when the Civic Association proposed gifting the trees to the town.

The palms are replacements for trees that have died and are missing from the landscape in the midtown area.

“When word got out to our members, they gave handsomely to our campaign,” Mr. Corey said. “Within 3 ½ weeks, the campaign was fully subscribed. The residents loved the idea. Some residents gave many trees and others gave $100. We had a nice cross section of the community that was supportive.”

“This summer, we look forward to working with the town staff in implementing the plan,” Mr. Corey said.

Town Council President Danielle Moore thanked the Civic Association for the gift of the trees as well as the endowment for maintenance of them.

“We are most grateful for your efforts on behalf of the residents of the town,” Ms. Moore said.

“Thanks John, for looking out for all of us,” Mrs. Zeidman said. “It shows a lot of passion, a lot of motivation, a lot of love for the community.”