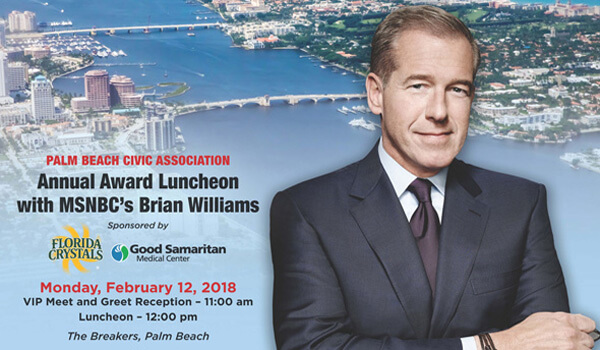 That’s due in part to the embellishment scandal that forced him from his perch as anchor and managing editor of NBC Nightly News. But Williams has another reason not to slow jam the news on The Tonight Show: he’s got his own late night show, and it’s a hit.

“What an hour of cable news should have, of course, is viewers–and Brian Williams has plenty. The 11th Hour finished 2017 as the top-rated cable news show in its time slot, with an average total viewership of 1.557 million. It was MSNBC’s best ratings performance in the time period ever–and the first time any MSNBC show had finished the year ahead of Fox News among total viewers in prime time since 1999.”

Brian Williams is the Keynote Speaker for the Palm Beach Civic Association Annual Awards Luncheon. See below for details: