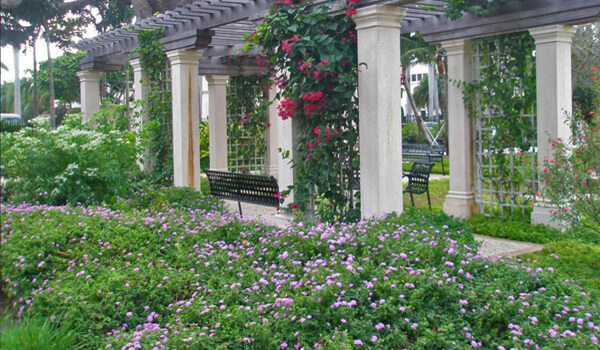 And that begins with residents educating themselves on what pesticides are being sprayed on their property and the frequency of spraying that’s taking place, Ms. Durst says. She urges that residents monitor the pesticides that are sprayed daily, monthly, and annually. “We are always looking for beautiful Palm Beach gardens and healthy children, but we are killing one of the most important environmental aspects of our life. Our life depends on a vibrant ecosystem and that cannot be run without insects. By spraying a couple of annoying insects, we’re killing thousands of good insects. Three different species of bumble bees have gone extinct.”

Ms. Durst said she asks the pest control technicians what they’re spraying, and they don’t know. One of many butterflies in the Susanne Durst garden.

Phosphorous and nitrogen are two of the worst things that can be sprayed, especially in the summertime when it rains heavily and runs into the waterways, Ms. Durst said.

“This is affecting us physically, especially our children and our pets,” she said.

Ms. Durst’s love of the environment dates back to childhood.

Her father was a landscape architect and her grandparents owned a large farm. She and her husband, Douglas, have owned the biggest certified organic farm in New York for more than 35 years. It’s a 1,200-acre farm in Millerton, New York. They also have a large garden at their Katonah, N.Y. residence. They have never used pesticides anywhere, she said.

“We grow vegetables and have livestock,” Ms. Durst said of their Millerton farm. “We have a large teaching facility and take interns from all over the world. We have a big road stand on Rt. 22 with a bakery and a kitchen. I’m talking from experience.

Ms. Durst urges residents to learn what is being sprayed on their property and to monitor the frequency. It becomes harmful when pesticides are sprayed on a daily basis and, especially, in high winds, which makes the spray drift onto other properties, she said.

“Roses have to be sprayed in Florida, but it should be done on a day with no wind, so it doesn’t carry to next three houses,” she said. “We are truly killing one of the most important environmental aspects of our life.” Doug Tallamy, professor and chairman of the department of entomology and wildlife ecology at the University of Delaware, agrees. One of his research goals is to better understand the many ways insects interact with plants and how such interactions determine the diversity of animal communities. Mr. Tallamy won the Silver Medal from the Garden Writer’s Association for his book, Bringing Nature Home.

“If people knew the degree to which they are exposed to all of these toxins that we are putting in our yard, they wouldn’t do it,” Mr. Tallamy said. “We need functional ecosystems and spraying is inconsistent with that. It kills the things that run those ecosystems.”

It’s not just the spraying that’s dangerous, Mr. Tallamy says. It’s the use of fertilizers that wash into the waterways during rainy season and cause the blue-green algae blooms, he said. One key to good landscaping is to use plants that have evolved in South Florida that other plants and animals have interacted with for thousands of years. Then you will need very little spraying – if any, he said.

“Everybody’s property is part of the local ecosystem and if you treat your property in a way that degrades that ecosystem, and everybody does that, you’ll have an ecosystem collapse,” he said. “The less you spray the better, and only do it when it’s necessary – when you have a targeted pest and there’s an outbreak. Preventive spraying is no good. When you spray, the first thing you kill the natural enemies of the pests you’re trying to kill.”

Ms. Durst added, “Everyone is so good about eating healthy food, wearing the right clothes, doing their exercises. Now is the time to be more educated about the pesticides that are being sprayed. Be aware of what goes on in your yard.”

The annual Spring Benefit was held in the garden of Susanne and Douglas Durst’s home. More than 300 guests enjoyed an open bar; hors d’oeuvres; and a live auction featuring rare and exotic plants, orchids and arrangements.