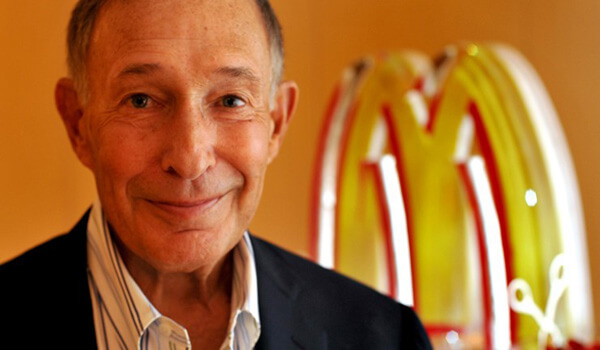 Nothing can take the place of persistence in achieving success, says George Cohon, senior chairman and founder of McDonald’s in Canada and Russia.

He should know. It took Mr. Cohon 14 years to ink a deal with the Russian government, allowing him to open the first McDonald’s there in 1990.

Despite obstacles along the way, he persisted in pursuing avenues and making connections until his idea came to fruition.

“There are 650 McDonald’s restaurants in Russia today and 50,000 Russian employees,” he said. “It’s a Russian success story.” Or, as Mr. Cohon refers to it, “Hamburger Diplomacy.”

A Civic Association Director and member of the executive committee, Mr. Cohon spoke to more than 30 members of the police and fire departments Monday as part of the Town of Palm Beach Public Safety Leadership Series. The series is designed to have community leaders share their success stories in an effort to help develop future department leaders.

The noon meeting, held in the Society of the Four Arts’ Dixon Education Building, was catered by McDonald’s. Mr. Cohon, 80, grew up on the south side of Chicago in a rough neighborhood. He graduated from Drake University in Iowa and Northwestern University School of Law. “Part of my success is because of what I learned on the south side of Chicago,” Mr. Cohon said. “I learned street smarts there. Ray Kroc, our founder, had a great saying, ‘None of us is as good as all of us.’ Together you do things.

All the successes that I’ve had in my life, and I’ve been very fortunate, is because of the people working together with me. No one person does it. Too often the CEO or the founder gets too much of the credit, but I try to pass the credit around, which is what we all should do.”

It was through a client who wanted to buy a McDonald’s franchise that Mr. Cohon met Ray Kroc. When the deal with Mr. Cohon’s client fell through, Mr. Kroc offered a franchising opportunity for Eastern Canada to Mr. Cohon for $70,000. Mr. Cohon borrowed the money, moved his family to Canada and opened his first restaurant in London, Ontario in 1968.

“You build the company one store at a time and you never forget that the customer is the most important person in your life,” he said. “You exist because of the customer.” It was in 1976 that he received a call from the Canadian government, asking to borrow his customized Greyhound bus to entertain the Russians during the summer Olympics in Montreal that year. The next Olympics in 1980 was going to be held in Moscow and the Russian delegation (called the Soviet Union at the time) was going to be in Montreal.

While walking in Montreal with his family, Mr. Cohon saw his bus with the Russian diplomats coming out of the bus. He wanted to meet them, but was stopped by an official who told him that he needed to go through the Protocol Department in Ottawa in order to meet them.

“I told him, ‘the protocol is that I own the bus,’” Mr. Cohon said. One of the Russians understood English and they all wanted to thank Cohon for loaning them the bus. They invited him to dinner. Mr. Cohon said that he would go to dinner with them, but first wanted to stop off for a snack. He took them to McDonald’s.

“They had seen a McDonald’s and never heard of it,” he said. “They fell in love with it.” Mr. Cohon asked the Russians how they thought McDonald’s would do if he opened one in the Soviet Union.

They thought it would be successful, Mr. Cohon said. “That was the entry point for getting McDonald’s into the Soviet Union,” he said. “Everyone thinks we plotted it and it was some Machiavellian scheme. What really happened was, ‘the protocol is I own the bus,’ and that started the dialogue.

“Understand what was going on in 1976 between the United States and the Soviet Union,” he said. “President Ronald Reagan is saying it’s the evil empire. It’s the heart of the Cold War. It’s Communism versus Capitalism and I went into this country during all that. I never viewed them as the enemy. I never was afraid when I was there.” Mr. Cohon said he and his team met with anyone who would meet with them to try and get the first McDonald’s open in Moscow in time for the 1980 Olympic Games.

By 1979, Mr. Cohon thought he had a deal in hand after he met an athlete on the Soviet basketball team, who said he could help facilitate it. Mr. Cohon said he was holed up in a hotel room for 17 days waiting to ink the deal. “After 17 days, I thought I was going in for a signing ceremony and the look on his face told me that the deal was dead,” Mr. Cohon said. “This is after spending five years of my life and millions of dollars.”

During this time, Mr. Cohon read a favorite inspirational piece of Mr. Kroc’s called “Press On.” The takeaway is that persistence and determination pay off in the end. Mr. Cohon became friends with Alexander Yakovlev, the Soviet Ambassador to Canada, who told him “the ideology will change.”

When Mikhail Gorbachev came into power, Mr. Yakovlev was called back to the Soviet Union and was put in a high position in the government with his office right next to Mr. Gorbachev’s. Mr. Yakovlev put Mr. Cohon in touch with the Mayor of Moscow, which started the breakthrough and eventually sealed the deal.

In 1999, Mr. Cohon published a book that recounts his path to getting McDonald’s into the former Soviet Union called, “To Russia With Fries.” The book was a bestseller.

Mr. Gorbachev, who became a friend of Mr. Cohon’s, wrote the forward. Mr. Cohon gave a book to each of the public safety employees who attended his talk.

Mr. Cohon became a Canadian citizen in 1975 and lives in Toronto and Palm Beach with his wife of 57 years, Susan. They have two sons and three grandchildren.