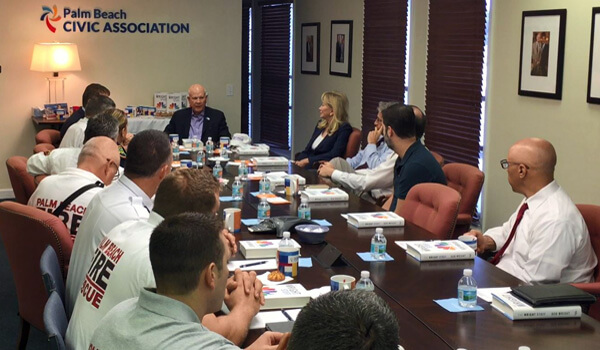 The discussion was part of the Town of Palm Beach Public Safety Leadership Series, which is designed to have community leaders share their success stories with public safety employees in an effort to help develop future department leaders. Mr. Wright gave a copy of his book, The Wright Stuff, to each attendee.

In his book, Mr. Wright, details his life as an attorney and businessman and his ultimate rise to becoming vice chairman of General Electric and chief executive officer of NBC and NBC Universal.

“This whole book is about accepting responsibility for yourself,” Mr. Wright said. “If you want to be successful, you have to accept responsibility. You can’t be blaming other people … You have to think ahead to what the obstacles are and when they arrive, you have to deal with them.”

The book also explains how Mr. Wright and his late-wife Suzanne co-founded Autism Speaks in 2005 after their grandson, Christian, was diagnosed with autism.

Mr. Wright thanked the police and firefighters, saying the service they provide is crucial to Palm Beach residents.

“It’s a very important aspect to living here and it’s one of America’s safest places,” he said. “There’s a genuine spirit of support and respect for you.”

Regarding his long career in business, Mr. Wright said he made sure that he kept good working relationships with his bosses as well as with the people he managed.

“I always respected and understood that it wasn’t my company,” he said. “I tried my very best to keep the best working relationships with the people who were managing me so that I could do the things I wanted to do … and I had to make sure that I could protect the people working for me as best I could. If you’re working for people you don’t get along with, it’s not going to help you manage the people that you have to manage. It will just create a lot of friction. The more I did, the better I got at it. That gave me the strength to jump to another industry.”

Mr. Wright graduated from the University of Virginia Law School in 1968 and was hired as a staff lawyer by GE in January 1969. He was drafted and served in the Army Reserves during the Vietnam War.

He left GE twice – and was rehired both times. The first time, he left to gain more legal experience clerking for a federal judge in 1970 and returned to GE three years later. In 1980, he left to become president of Cox Cable. Three-and-a-half years later, GE Chairman and CEO Jack Welch called Mr. Wright to come back to work at GE – and he did.

“I changed my career a half dozen times and people asked me why,” Mr. Wright said. “I had a lot of self-confidence and if I couldn’t do something for my family and something else became available, I would go do that.”

When GE bought RCA and acquired NBC, Mr. Wright became president of NBC. He called it, “a very challenging moment for me.” There was some dissention in the ranks and Mr. Wright had to sort through it all. People at NBC hated their previous owner, RCA, and were fearful of GE. When Mr. Wright tried to make changes, some people were resistant. Some of the people resigned and some he asked to resign.

“By that point in my career, I realized that change was important,” Mr. Wright said. “No business can stand still for very long. No institution can stand by and be aloof of change … Change is something you have to learn to like and to be aware of.”

Mr. Wright said he has always been involved in philanthropy. While at GE, he became active in the United Way in the New York, New Jersey and Conn areas and now serves on The Town of Palm Beach United Way.

Mr. Wright and Suzanne Wright co-founded Autism Speaks – with a lot of help from their friends and others – after their grandson Christian was diagnosed at 2 ½ years old. The Wrights discovered there was no insurance coverage to care for kids with autism.

“Families were paying for all these therapies with their Mastercard,” he said. “A child with autism – mid-range – needs 35 hours a week of therapies and they couldn’t afford it. They all had no more borrowing capabilities.”

When Suzanne Wright was diagnosed with pancreatic cancer in 2015, she died within nine months in July 2016. They were married 49 years.

Eighty-five percent of people diagnosed with pancreatic cancer are stage four and the cancer has already moved to other organs, Mr. Wright said. That’s a death sentence.

“I felt like this was autism all over again,” he said. “With all the help in the world, if you’re in that 85 percent, you have between six and 12 months.”

The doctors don’t have the tools to fight this disease, he said.

After Suzanne Wright passed away from pancreatic cancer, he launched The Suzanne Wright Foundation, known as “Code Purple,” to raise money for the fight against that disease. Susan Keenan, who also attended the meeting, is helping Mr. Wright with this new effort. They were married four and a half months ago.

“From all my business experience, I try to take all the good things I got out of it and put it into everything I do,” Mr. Wright said.

Creating work-life balance is very important, he said. While working in the highest echelons of business, Mr. Wright said he made time to be with his family. He has three children and six grandchildren.

His three granddaughters are involved in athletics and he tells his grown children they should never miss an opportunity to see their children play sports.

“If you miss that basketball game, that game is not going to happen again,” he said. “Maybe she’ll stop playing basketball and you may never see that again.”

As an attorney, Mr. Wright passed four separate bar exams to be eligible to practice law in four different states: Virginia, New York, Massachusetts and New Jersey. They were all difficult exams and he passed with high grades, he said. As he looks back on that, Mr. Wright said that gave him a lot of self-confidence. Also, change creates opportunities for more productivity, he said.
Mr. Blouin asked Mr. Wright what it was like to work for Jack Welch.

“Enjoyable, exciting, and mysterious,” Mr. Wright said. “He’s excellent and has a very sharp mind and was a very good leader. He had a lot of people to deal with and all these businesses, so he was very tough and we set a lot of goals … A lot of times I couldn’t get him to do what I wanted and a lot of times I didn’t like what he wanted me to do, but that goes with the deal. He was right more than he was wrong. I got a lot of support from him. I worked for him for over 20 years. Some of those days weren’t too pretty, but we had a lot of good times together. He traveled a lot and was always learning and got a lot of opinions from around the world. That was exciting.”