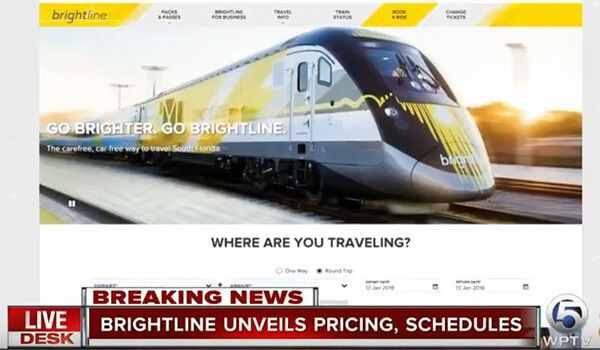 By: R. Michael Brown, Civic Association Communications Director — This morning Brightline said they will open trains to the public this Saturday, January 13.

Round-trip fares starting at $20 for rides between its stations in Fort Lauderdale and West Palm Beach. During the week, the company plans to run 10 round-trip trains a day between the two cities. There will be nine round-trip trains on the weekends.

In South Florida, trains are running on Henry Flagler’s historic rail corridor, passing through the downtown of many coastal cities, but will only eventually stop in Miami, Ft. Lauderdale, and West Palm.

The company launched its new website this morning but it’s running slow, probably because of all the traffic with the announcement. Customers can buy tickets and check train times on the website.

Travel time between West Palm and Ft. Lauderdale is expected to take about 35 minutes at speeds of up to 79 mph.

Ft. Lauderdale Station: Where to Go From Here? So you’ve booked your train trip from West Palm to Ft. Lauderdale. Great!  But once you get to the Ft. Lauderdale Brightline Station, now what?  Brightline’s website has a link:

GO FROM OUR STATIONS
TO YOUR DESTINATIONS.
Find options to seamlessly connect you from our stations to places all over the city.

When I clicked on the link the page had no information. It just took you to pretty renderings of their stations.

The station is at Broward Blvd. near the Museum of Discovery and Science, within walking distance just 4 blocks away. The Broward Performing Arts Center is about 6 blocks away in the same direction as the museum.

The heart of Las Olas shops and restaurants is about 10 to 12 blocks away.

But everything else is going to require some kind of transportion.

The beach and A1A shopping, restaurants, clubs, and entertainment starts at 4 miles away.

To get to the Ft. Lauderdale Airport, which is 6 miles away you can take a bus that runs every 20 minutes. Google maps reports that ride is 37 minutes. Uber is another option, but even that is 21 minutes.

It begs the question, is Brightline going to offer a shuttle to the airport and cruiselines at Port Everglades, 4.5 miles away? Or are you on your own?

Stay tuned to find out.

Brightline said it plans to extend service to its station in Miami in the coming months when the station is finished with construction.

Eventually, Brightline plans to offer trips between South Florida and Orlando. Construction on the Orlando leg is set to begin this year, Brightline said.

Finally, you can ride Brightline trains this weekend for $10
Read More (SunSentinel)