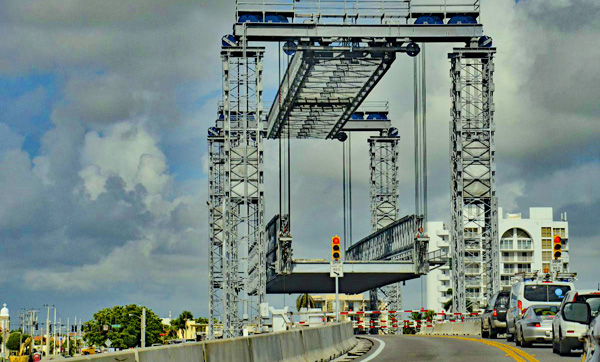 Periodic closures of the navigable Intracoastal Waterway through the Southern Boulevard Bridge may occur because of ongoing construction, the Florida Department of Transportation said Tuesday.

A full-channel closure is scheduled from 7 a.m. on Monday, Sept. 26, through 5 p.m., Saturday, Oct. 1, as the temporary bridge’s lift span is removed. Marine vessels will not have access and bridge openings will be suspended during that time, the DOT said. Vehicle and pedestrian traffic will not be impacted.

After Oct. 1, half-channel navigation with 40 feet of horizontal clearance will continue through the end of the year as the temporary bridge is dismantled.

During full-channel closures, mariners are encouraged to avoid the area, the DOT said. Times and dates of the channel closures are subject to change. The schedule of channel restrictions is published in the U.S. Coast Guard’s Local Notice to Mariners at www.navcen.uscg.gov. For on-scene communications, mariners are advised to use VHF Marine Radio Channel 9.

After more than five years of construction, the new Southern Boulevard Bridge opened to traffic on Sept. 1.

The project has included replacing the existing drawbridge and tide relief bridge over the Intracoastal Waterway and Lake Worth Lagoon between West Palm Beach and Palm Beach.

New decorative lighting, pedestrian features, traffic signals, signage and drainage are included with the new span. Construction began in April 2017 and will last until early 2023. The estimated construction cost is $97 million.