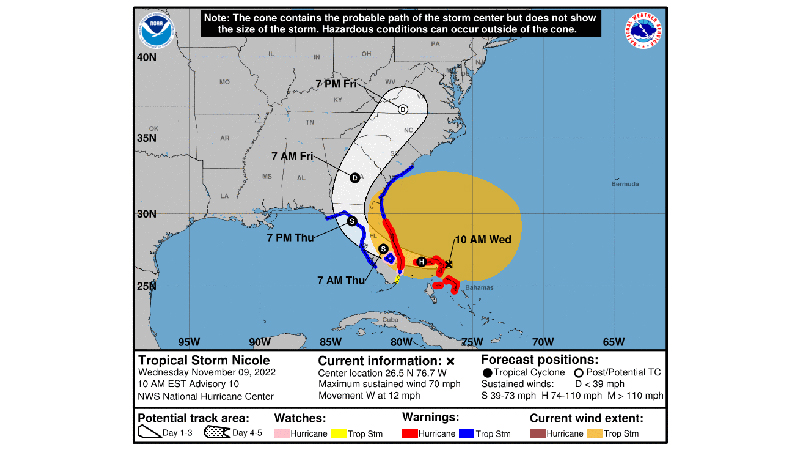 Tropical Storm Nicole is forecast to reach the coast of Florida Wednesday night as a Category 1 hurricane with a landfall between Boca Raton and Sebastian.

As of 10 a.m. Wednesday, the storm was lashing the Bahamas with sustained winds of 60 mph and gusts up to 75 mph. Nicole was moving in a westerly direction at 10 mph and was expected to reach hurricane strength before striking Florida’s east coast.

Palm Beach County has ordered mandatory evacuations of zones A and B, which includes barrier islands, mobile homes and low-lying areas. The town of Palm Beach falls within zone B.

The evacuation order took effect Wednesday as of 7 a.m.

The National Hurricane Center is warning of “life threatening storm surge” in areas under a storm surge warning. That warning area extends from North Palm Beach northward to the Georgia line.

In Palm Beach, as rain bands were moving in, some flooding along the Lake Trail, including Bradley Park, and in other low-lying areas, was already evident.

In a storm alert issued this morning, the town advised residents to expect deteriorating conditions throughout the day. Residents were advised to complete all storm preparations and stay off the roads until after the storm has passed.

“Tropical storm conditions are already starting to impact the coast, and the winds are expected to intensify to hurricane speeds as the day progresses,” the alert stated.

“Elevated tides, ocean swells and deteriorating beach conditions can be expected across the coast because of high tides” with elevated wave heights exceeding 12 feet.

Town Manager Kirk Blouin said town police would not go door-to-door to convince people to leave their homes ahead of the storm.

The town anticipates flooding, perhaps a foot or so deep, along the Lake Trail and in other low-lying areas, Blouin said. Some wind damage is expected, he said.

“We are going to have some impacts,” Blouin said Wednesday morning. “There’s going to be wind. Is it going to be life-threatening? I don’t believe so.”

But he stressed that people who ride out the storm should exercise caution and good judgment.

“People should stay away from the windows,” Blouin said. “Move to a safe place in your house and you should be fine.”

The town on Tuesday removed lifeguard stations from the public beaches, which are closed until further notice, and told construction crews to secure their sites.

Schools on the island were closed.

Wednesday’s Town Council meeting on development reviews was postponed until Tuesday, Nov. 15 beginning at 3 p.m. in the council meeting chambers at Town Hall.

Get information about Tropical Storm Nicole from the National Hurricane Center here.