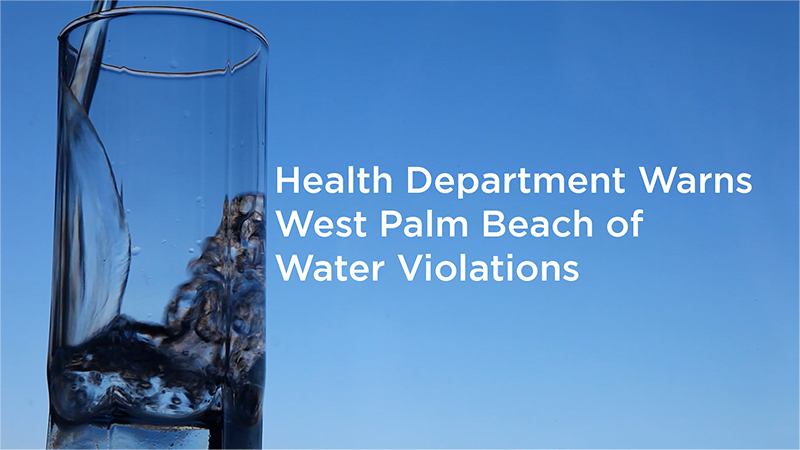 The Florida Department of Health has warned the City of West Palm Beach that it may have violated state law by failing to inform the health department sooner that it had detected a toxin in its drinking water supply.

In a letter to the city dated Tuesday, June 22, the health department said data provided by the city since August 2016 shows the toxin cylindrospermopsin was detected in 55 water samples collected “at the point of entry into the distribution system.”

All of the 55 samples were subject to monthly reporting requirements under the Florida Administrative Code, but the city failed to meet those requirements, according to the health department.

Of the 55 samples, 47 were subject to a seven-day notification requirement that the city failed to meet, the health department said in the letter.

Under the state law, the violation of code rules could expose the city to liability for damages, and to civic penalties, the health department informed the city.

The letter, addressed to Poonam Kalkat, the city’s director of public utilities, gave the city 15 days to contact the department and “arrange a meeting to discuss the matter.”

The city learned through test results on May 17 that the cylindrospermopsin toxin, which is related to cyanobacteria or blue-green algae contamination, had reached levels unsafe for vulnerable members of the population to drink.

But the city did not notify the Town of Palm Beach until May 28, and did not issue a public advisory about the contamination until around 10 p.m. that day.

Cylindrospermopsin can cause an upset stomach, diarrhea, and vomiting as well as liver and kidney damage. The city advisory said pregnant women, nursing mothers, young children and people receiving dialysis, or who have liver conditions, should not drink the water. The water was also unsafe for pets.

The city lifted the advisory on June 4 after consecutive lab tests showed the toxin had fallen to levels that made the water safe for consumption.

Moore said at the June 8 Town Council meeting that she’s heard from many residents who are “concerned, upset and worried” about the safety of the town’s drinking water.

“Learning about the presence of cyanobacteria in our drinking water was extremely concerning, but learning this presence was known by the City of West Palm Beach at a much earlier date was very disappointing and frankly upsetting,” Moore said. “I was more than a little angry.”