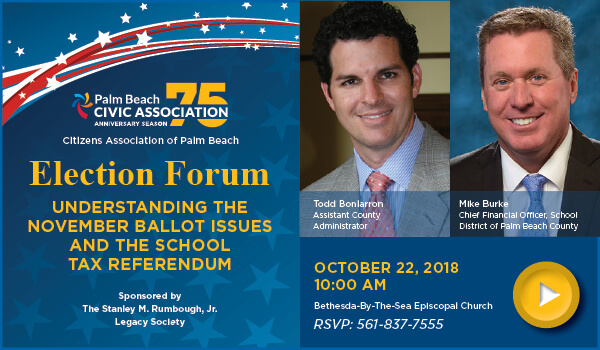 The Civic Association will present an Election Forum to help voters understand the November ballot issues, including the school Tax Referendum, at 10 a.m. Oct. 22 at The Episcopal Church of Bethesda-by-the Sea.

The Countywide School Tax Referendum plus 12 Constitutional Amendments will appear on the ballot in addition to voting for a new governor, a senator, and other elected officials for the Nov. 6 Midterm Election.

The Civic Association Forum is to explain the ballot questions.

Mr. Burke will present an explanation of why the school district will ask voter approval to levy an additional property tax of 1 mill. That’s $1 for every $1,000 of assessed property value beginning on July 1, 2019 and ending on June 30, 2023.

As an example, property owners with $1 million worth of assessed value would pay an extra $1,000 to the school district.

The tax will add $200 million per year, for the next four years to the school district budget, and will be dedicated specifically to fund school safety equipment; hire additional school police and mental health professionals; fund arts, music, physical education, career and choice program teachers, and improve teacher pay.

“It’s a quality of life and a societal question,” Mr. Burke said. “Do you want to live in a society where kids have opportunities to get a good education – whether they go on to higher education or into the trades? An unemployed person will cost you much more in the long run. This is an investment in the economy and in our children. We want them to have productive lives and be productive citizens.”

The money will help fund the police officers and mental health professionals in every school as required by the Marjorie Stoneman Douglas High School Public Safety Act, passed by the state Legislature after the Feb. 14 shooting in Parkland.

An independent finance committee will oversee the spending to ensure the money goes to the designated areas, Mr. Burke said.

Over the past several years, the state legislature has cut hundreds of millions from the district’s budget, including $180 million from this year’s budget, Mr. Burke said. There has been an existing school district tax in place of 25 cents per every $1,000 in taxable value for the past eight years, but that is expiring this year. Voters approved that tax in 2010 and again in 2014.

If the voters reject the Tax Referendum, 650 teacher positions in arts, music, physical education, career and technical education will have to be cut, Mr. Burke said.

The breakdown of where the money will go:

Mr. Bonlarron will explain the 12 Constitutional Amendments (see summaries below) at the Forum. He urges residents to come out and educate themselves on what a vote for or against those amendments will mean.

“These ballot questions deal with everything from gambling in the state of Florida to a prohibition on oil and gas drilling to the college and university system,” Mr. Bonlarron said. “There are a wide range of issues. If you don’t spend some time learning about them, the meanings might not be so obvious from reading the summaries on the ballot.”

“I’m going to lay out all sides of the issues,” he said. “I’ll tell you who’s for it and who’s against it; how it got on the ballot; what exactly it means and what it means to a voter. I want to give everyone the best opportunity to make the most informed decision that works best for them.”

The Community Election Forum is at 10 a.m. Oct. 22 at The Episcopal Church of Bethesda-by-the Sea, 141 S. County Rd. There will be complimentary valet parking. The Citizens’ Association is a sponsor. The forum is free and open to the public, but registration is required. To register, call the Civic Association reservation line: 561-837-7555.

(Amendment 8 has been removed from the ballot by the state Supreme Court after a lawsuit from the League of Women Voters challenged the language as being misleading.)

No. 1. BALLOT TITLE: Increased Homestead Property Tax Exemption
BALLOT SUMMARY: Proposing an amendment to the State Constitution to increase the homestead exemption by exempting the assessed valuation of homestead property greater than $100,000 and up to $125,000 for all levies other than school district levies. The amendment shall take effect January 1, 2019.

No. 2. BALLOT TITLE: Limitations on Property Tax Assessments
BALLOT SUMMARY: Proposing an amendment to the State Constitution to permanently retain provisions currently in effect, which limit property tax assessment increases on specified non-homestead real property, except for school district taxes, to 10 percent each year. If approved, the amendment removes the scheduled repeal of such provisions in 2019 and shall take effect January 1, 2019.

No. 4. BALLOT TITLE: Voting Restoration Amendment
BALLOT SUMMARY: This amendment restores the voting rights of Floridians with felony convictions after they complete all terms of their sentence including parole or probation. The amendment would not apply to those convicted of murder or sexual offenses, who would continue to be permanently barred from voting unless the governor and cabinet vote to restore their voting rights on a case by case basis.

No. 5. BALLOT TITLE: Supermajority Vote Required to Impose, Authorize, or Raise State Taxes or Fees
BALLOT SUMMARY: Prohibits the legislature from imposing, authorizing, or raising a state tax or fee except through legislation approved by a two-thirds vote of each house of the legislature in a bill containing no other subject. This proposal does not authorize a state tax or fee otherwise prohibited by the Constitution and does not apply to fees or taxes imposed or authorized to be imposed by a county, municipality, school board, or special district.

The last six amendments come from the Constitution Revision Commission. The commission chose to group different proposals together within some of the amendments. Voters must accept or reject the separate items together as a whole.

No. 9. BALLOT TITLE: Prohibits Offshore Oil and Gas Drilling; Prohibits Vaping in Enclosed Indoor Workplaces
BALLOT SUMMARY: (Ties two different items together). Prohibits drilling for the exploration or extraction of oil and natural gas beneath all state-owned waters between the mean high-water line and the state’s outermost territorial boundaries. Would ban use of vapor-generating smoking devices in enclosed indoor workplaces.

NO. 11. BALLOT TITLE: Property Rights; Removal of Obsolete Provision; Criminal Statutes
BALLOT SUMMARY: (Ties two different items together). Would revise the Constitution to remove language that stops “aliens ineligible for citizenship” from owning property and other language approving a high-speed rail system. Deletes provision that amendment of a criminal statute will not affect prosecution or penalties for a crime committed before the amendment; retains current provision allowing prosecution of a crime committed before the repeal of a criminal statute.

No. 13. BALLOT TITLE: Ends Dog Racing
BALLOT SUMMARY: Phases out commercial dog racing in connection with wagering by 2020. Other gaming activities are not affected.