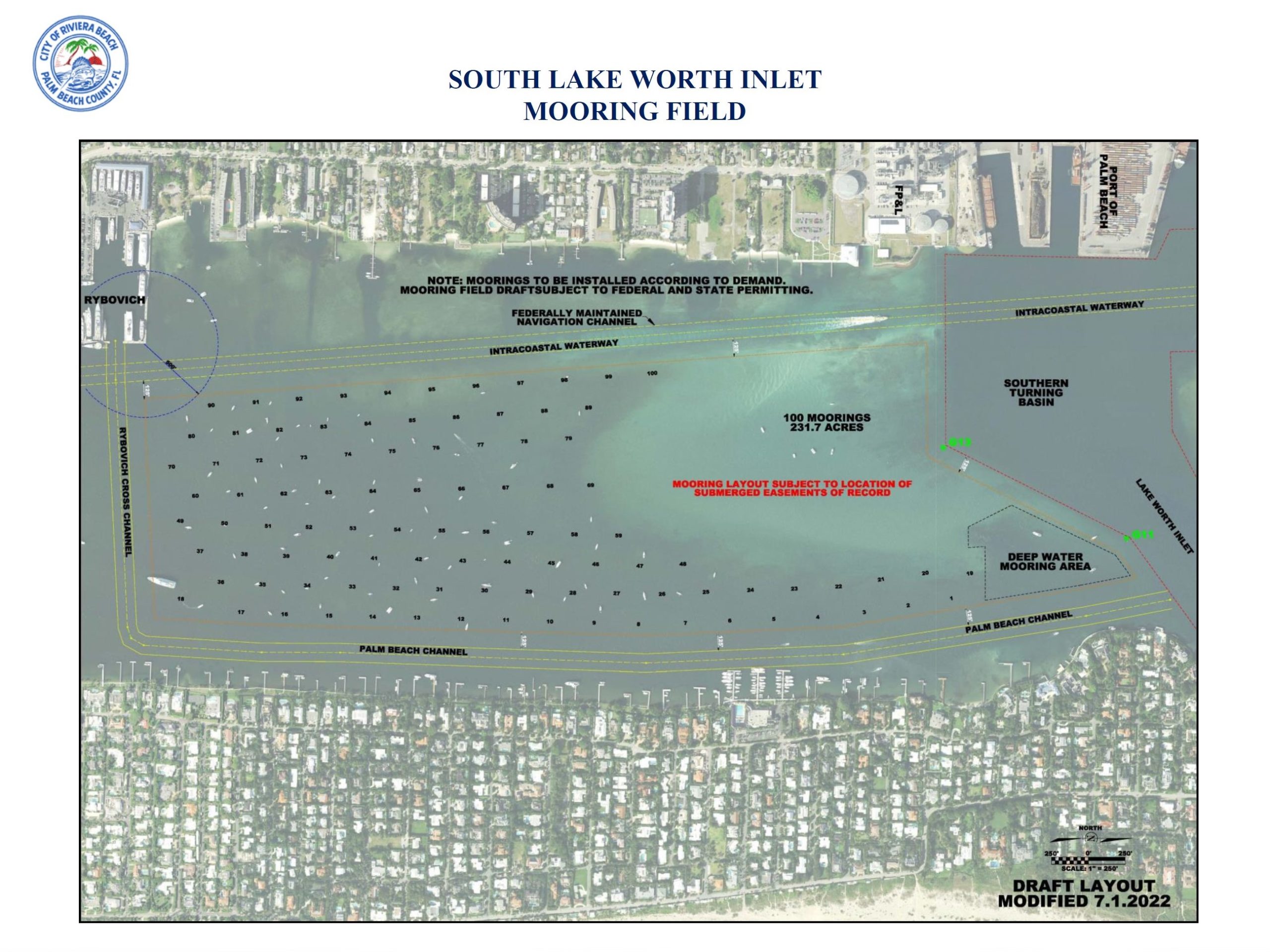 The City of Riviera Beach may be backing away from its proposal to create a mooring field for 100 boats in the Lake Worth Lagoon near Palm Beach’s North End.

Town officials are strongly opposed to the plan and say the mooring field would be within Palm Beach’s municipal boundary.

The city was seeking permits to establish mooring zones at the location near Palm Beach and at another site near Phil Foster Park, where it planned to accommodate 56 boats. In correspondence between the city and its project consultant, John Sprague, the city indicated that it intends to submit modified applications to FDEP in the future. Details were not available.

Riviera Beach officials did not answer questions about the status of the project that were sent Wednesday in an email to the city’s public information officer.

At the Palm Beach council’s July 12 meeting, Moore and all five council members strongly objected to the site near Palm Beach, saying the mooring field would create a nuisance and a safety threat for North End residents.

At the behest of the council, Moore sent a July 19 letter of objection to both the Department of Environmental Protection and the U.S. Army Corps of Engineers, with whom Riviera Beach applied for a federal permit for the project.

Moore wrote that the mooring field “would adversely impact the quality of life [and] safety of our residents and serves to provide no benefit to the Town of Palm Beach. At no point should any local government entity have the ability to obtain a permit to perform work in another municipality without prior approval received by that municipality.”

Moore’s letter also stated the town’s intent to challenge any state or federal permit issued for the mooring field.

Sprague reported on the mooring field proposal at the July 12 meeting after the town learned about it through an article in the Palm Beach Post.

By then the plan had already been in the works for about a year and Riviera Beach was far into the permit review process – all without having notified Palm Beach, town officials said.

Sprague said Riviera Beach approached him a year ago about its interest in establishing a mooring field to address the problem of derelict vessels in Palm Beach Harbor. The area already is heavily used by boaters and would benefit from tighter management, he said.

A mooring field is a legally defined area within a body of water, established by a local ordinance so a government can regulate activities within it. Boat owners can rent buoys and tie up their boats and, in some cases, live aboard them, Sprague said.

Riviera Beach has a police boat and would add another one to boost law enforcement, Sprague said. There also would be a boat to collect sewage and transport people back and forth to the shore, he said.

But Town Manager Kirk Blouin said that would not be enough to handle the noise and other complaints that would be caused by so many boats stationed in such close proximity to the town. Blouin said Riviera Beach and the Palm Beach County Sheriff’s Office would not have enough resources to deal with it.

“I could not imagine having 100-plus boats in this area and the type of complaints that is going to generate,” Blouin said. “I would probably have to hire four or five officers just to handle the complaints.”

Moore told Sprague she found it “rather disconcerting” to learn about the plan through a media report.

“I’m just incredibly disappointed you did not bring it to us prior to this,” she said. “I think it’s disingenuous … I don’t think this was very nice.”

Moore added that, based on the feedback she has heard, Palm Beach residents are “vehemently opposed” to the idea.

Sprague apologized on behalf of the city and said it was exploring the logistics before going public with the plan. That explanation didn’t appear to satisfy the council.

“It’s inexcusable, given the fact that you’re going to be plunking down at our doorstep, if this project goes through, a pretty significant community of people who will be drinking, laughing, going to the bathroom and undertaking a whole series of activities that are likely to affect us in a very bad way,” Councilman Lew Crampton told Sprague.

Bob Holuba, chairman of the Palm Beach Civic Association’s Port of Palm Beach/Peanut Island Committee, said Thursday the Civic Association would be pleased to see Riviera Beach abandon any notion of setting up a mooring field so close to the town’s shore.

But Holuba said Palm Beach’s lakeshore residents could benefit if a vessel registration system was established with oversight by the sheriff’s office.

“The idea of registering overnight vessels probably makes a wise security idea for the residents of Palm Beach Island,” Holuba said. “Right now, anybody can drop an anchor, traffic illegally, and in the dead of night hop on a little jon boat and come ashore.”