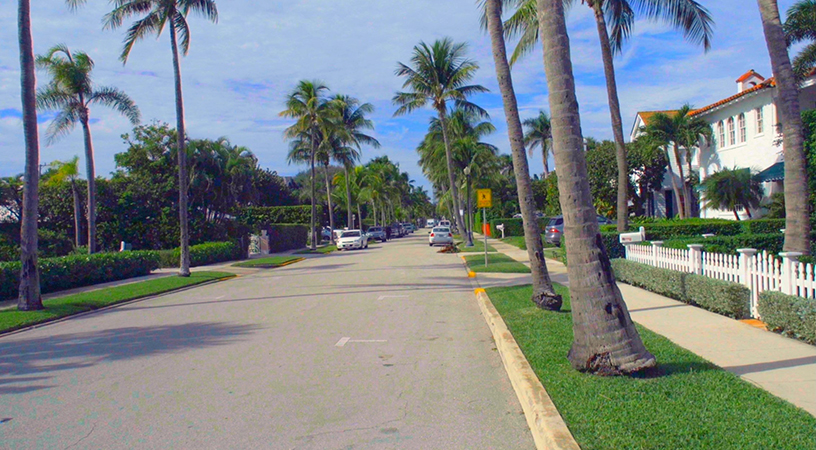 The town’s Landmarks Preservation Commission learned last week about a new state law that could be a gamechanger for historic preservation in Palm Beach.

The law prevents the town from protecting landmarked houses from demolition if they do not meet certain flood elevation requirements and if their owners did not agree to the landmark designation.

The law applies to single-family houses that were landmarked on or after Jan. 1, 2022, that are located within certain flood hazard areas, and that are at or below minimum flood elevation requirements, Zoning Director Wayne Bergman told the landmarks commission.

In another change brought by the law, property owners can now demolish non-landmarked houses that are listed by the landmarks commission for study as a candidate for landmark designation, Bergman said. Previously, houses were protected from demolition while under study.

“These are significant changes to the way you do business,” Bergman told the commissioners at their Aug. 17 meeting.

The law, known as House Bill 423, took effect July 1 after passing through the Florida Legislature and being signed by Gov. Ron DeSantis in late May.

Bergman said town officials and preservationists were caught off guard: “This thing sort of snuck through without a lot of acknowledgement. This is a poorly crafted and misguided law that continues to strip home rule away from the town.”

The law also takes reviews of demolition applications away from the oversight of the Architectural Commission (ARCOM), Bergman said. ARCOM oversees development applications for non-landmarked buildings. It has never had the authority to deny demolition requests but has regulated screening and other logistics to reduce the impact on neighbors and neighboring streets. But under the new law, the burden of demolition reviews will shift to town staff.

Proponents of the new law say owners should be free to demolish and replace houses that do not meet minimal flood elevation standards, regardless of historical or architectural merit.

There are about 350 landmarked buildings in the town. Owner consent has never been required for a building to be designated as a landmark. Designation gives the landmarks commission authority over an owner’s plans to significantly alter the exterior of a house or other building.

Responding to a question from landmarks Commissioner Patrick Segraves, Bergman said that, regardless of its location in a flood hazard area, a house is exempt from the new state law if its ground-floor elevation is above the Florida Building Code and FEMA minimum requirement. In other words, it would be protected from demolition.

But that same house could apparently lose its protection from demolition if it fails to meet tougher elevation standards adopted at some point in the future.

Currently, the town code says the ground floor elevation of a house must meet the FEMA minimum standard plus one additional foot of elevation, Bergman said. That puts the average minimum elevation at 7 feet. But landmarks Commissioner Jacqueline Albarran said it’s a matter of time before the minimum elevation requirement is increased to as much as nine or even 11 feet by the federal and town governments.

Because of concerns about flood damage tied to rising sea levels, FEMA is changing its flood maps, which will affect elevation requirements, Bergman said.

At the same time, the Town Council is considering changing town law to require an additional two feet of elevation, Bergman said. That is in response to a recommendation from town consultant Woods Hole Group, which recommended raising the minimum by up to three feet above the FEMA minimum after performing a flood vulnerability assessment of the island.

Landmarks commissioners asked questions about details of how the law will be applied. What if an owner neither objects nor consents to his or her house being landmarked? Would it be exempt from the state law?

What if an owner sells a house that was landmarked before Jan. 1 to a new owner who objects to the landmarked status? Under town law, the house would not lose its landmark designation and protection, regardless of the new owner’s objection. But what about under the new state law?

Town Attorney John Randolph said he would need to research the law further before answering those questions for certain.

Amanda Skier, president of the Preservation Foundation of Palm Beach, said the foundation was disappointed that it didn’t learn of the new law until it was too late.

Skier said the foundation will continue to educate and advocate on behalf of the landmark program. It’s also in contact with the Florida Trust for Historic Preservation, which she said is crafting a plan to respond to the state law.

Landmarks Commissioner Segraves said he doesn’t think the law is going to be too detrimental for historic preservation in Palm Beach. He noted that it’s legal for owners to demolish buildings that are on the National Register of Historic Places, and he compared the impact to that.

“Overall, I don’t think it’s going to weaken us much,” Segraves said.