Our Town with William Kelly: Town water plant would be costly, disruptive to build, consultant says 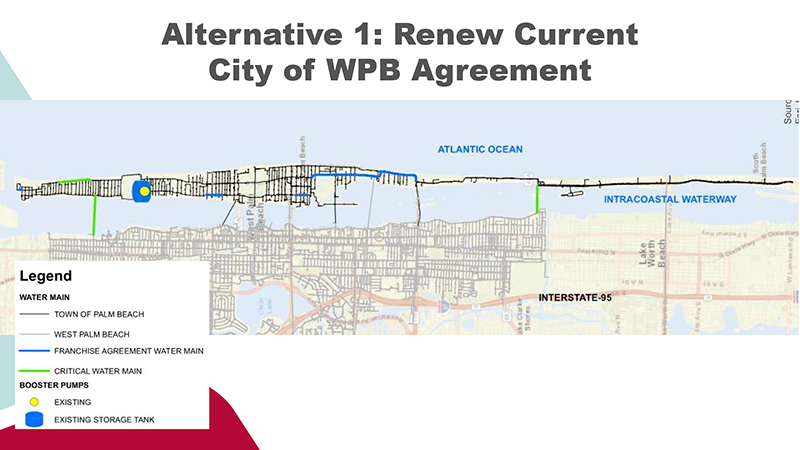 In a long-awaited report to the Town Council, a town engineering consultant on Tuesday outlined the difficulties facing the town should it decide to develop its own water supply.

The town must determine its future water source after its supply agreement with the City of West Palm Beach expires in 2029. Town officials say they need to decide soon whether to develop a town-owned utility, sign a new agreement with the city or find a different water provider.

Some of the alternatives would take years to design and build. Some would be hugely expensive, reaching into the hundreds of millions of dollars while requiring streets in town or in West Palm Beach to be ripped open for the installation of new distribution pipes, according to town consultant Kimley-Horn & Associates.

The town wants a water source that would be less vulnerable to toxins such as the cyanobacteria that last spring briefly contaminated the city’s treated water supply. Cyanobacteria, also known as blue-green algae, can appear in surface water supplies but it is not typically found in groundwater such as the Floridan aquifer.

The City of West Palm Beach relies on surface water that comes partly from heavily polluted Lake Okeechobee and travels through canals into the Grassy Waters Preserve, where it is filtered before being drawn from Clear Lake and processed in the city’s water treatment plant.

The plant uses a conventional treatment process that relies mainly on chlorine. Heavy chlorination can reduce the cyanobacteria, but that treatment approach presents serious health risks. The city says its water is safe and is tested daily.

“It’s complex,” Council President Margaret Zeidman said Tuesday. “It’s a very serious decision that is before the council. You might be surprised by some of the alternatives. I ask that everybody keep an open mind.”

The easiest and least expensive alternative is to continue buying water from West Palm Beach after 2029. The city would continue to treat the water at its existing plant and retain ownership of the water distribution lines in the town.

But under that scenario, the water quality issue doesn’t go away, Councilwoman Bobbie Lindsay said.

“Lake Okeechobee is forever polluted,” she said. “In our lifetimes, or even the next generation, it’s always going to be nutrient-rich and full of pesticides and all these things that go in there, with the agriculture industry all around it.”

A second alternative is to build a town-owned water plant, with more advanced reverse osmosis or membrane filtering treatment capability, on town-owned property on Quadrille Boulevard in West Palm Beach.

Reverse osmosis is expensive, but it essentially removes all impurities from the water, including cyanotoxins and “emerging contaminants,” such as chemicals from plastics or pharmaceuticals, that are creeping into the global water supply, town water consultant John Potts said. Membrane treatment is more effective than conventional, but not as powerful as reverse osmosis.

The town would buy the conventionally treated water from West Palm Beach and then apply advanced treatment at its own plant before piping it into town, said Jason Lee, an engineer with Kimley-Horn. The plant would produce 10 million gallons daily, enough to meet the town’s needs.

That would require the town to establish its own utility and hire employees to operate it. It also would mean cutting open streets in downtown West Palm Beach to build new distribution lines between the city plant, at Banyan Boulevard and Australian Avenue, and the new town plant on Quadrille Boulevard, Lee said.

It also would require construction along Flagler Drive to install pipe to connect the new Quadrille Boulevard plant with the five existing subaqueous crossings that carry water into Palm Beach.

Cost estimates for the Quadrille Boulevard project range from $269 million to $405 million, according to Kimley-Horn. A membrane plant at could be completed there by 2030.

A variation on this approach would be for the town to drill its own wells to tap into the Floridan aquifer and develop its own water source for the Quadrille Boulevard plant. But staff and Kimley-Horn said that would be difficult and more expensive to achieve.

“You can’t develop a wellfield at Quadrille that will produce enough water, and you have to space the wells far enough apart,” Public Works Director Paul Brazil said. “There has always been thought about developing the Quadrille site. But you can’t get [the water] through the aquifer.”

Finding land to install the wells, then building infrastructure to move the water from the wells to the Quadrille site would be a “technical feat,” Town Manager Kirk Blouin said.

“It would be very hard to pull that off,” Blouin said.

The difficulty doesn’t end there. Other utilities that have a permit to draw from the Floridan Aquifer could object to the town’s permit application if it would negatively impact their water source, Brazil said. The water district takes that into account when deciding whether to approve the permit request. The district also has power to cap the amount of water the town could take from the aquifer.

The town’s average daily water consumption is about 8.2 million gallons per day, according to the City of West Palm Beach.

Two more wells, known as injection wells, would be needed to dispose of the waste material from the treated water by pumping it deep into the ground, he said.

Like the Quadrille plant, the Phipps facility could produce 10 million gallons daily.

This alternative would require installation of 12 miles of new main water distribution lines, running north-to-south, from one end of town to the other because the existing lines are not large enough, Lee said.

The town would have to establish and staff its own utility operation. The plan would mean substantial loss of green space at Phipps Ocean Park, chemical delivery trucks coming in and out of the plant, and maintenance of the wells which would interrupt play at the golf course, Lee said.

The loss of green space could also require voter approval by referendum because of a rule in the Town Charter, he said.

The project cost is estimated at $352 million to $529 million. Construction could be completed by 2031, Kimley-Horn said.

On the positive side, the town would have control over an unlimited supply of water and would not have to apply for a water district permit to do it, Potts said.

Residents have already experienced a lot of construction, Moore said. “These are roads we just ripped up for undergrounding construction.”

At least some of the council members didn’t like the Phipps option, either.

Lindsay called it “kind of the worst-case buildout scenario. This is taking the largest park in town, cutting it in half and making it aesthetically really not a very nice place to be.”

Councilman Lew Crampton, who lives in the South End near Phipps Ocean Park, said residents south of Sloan’s Curve would be adamantly opposed.

“If this goes forward, I will be one of the people with a torch in hand and a big pitchfork,” he said. “This is not something the South End would greet with open arms. I will be leading the opposition to it.”

If the town decides to stay with West Palm Beach, it could discuss partnering with the city to upgrade its plant to membrane or reverse osmosis treatment, Lee said.

The cost estimate for this alternative is $547 million to $821 million, Lee said. The plant could be updated by 2027.

A variation of this approach would be to update the city plant over a longer period, say 20 years. The council was not interested in that but appeared open to discussing with the city a near-term upgrade of its plant to add reverse osmosis treatment.

Kimley-Horn evaluated the comparative costs of the options, assuming a 30-year bond issue to cover capital costs, and then the cost of the water customers would pay per 1,000 gallons.

Jupiter as an example

Michael Pucillo, vice chairman of the Palm Beach Civic Association, advocated taking a closer look at drawing from the Floridan Aquifer and building a reverse osmosis plant like the one operated by the City of Jupiter.

“It’s the best water you’re going to get,” he said.

Pucillo is co-chairman of the Civic Association’s Water Committee, whose members recently toured the Jupiter plant.

“It is night-and-day different from West Palm Beach,” said Pucillo, who is a former council president. “It is a clean, modern facility in the 21st century that produces water for roughly $3.40 (per 1,000 gallons).

Pucillo told the council it needs to make a decision within the next year.
“If you’re going to be applying for permits to get into the Floridan aquifer, you really are going to need to get going on it,” he said.

Kimley-Horn also looked at Palm Beach County and Lake Worth Beach as potential future providers of water to Palm Beach.

With the county, the town would have to buy the water wholesale then establish and operate its own utility, which would sell the water to customers in the town.

Connecting pipes would have to be built at Lake Worth Road, Southern Boulevard and Okeechobee Boulevard to bring in the county water.

It would cost the town an estimated $235 million for the infrastructure plus up to $209 million in connection fees charged by the county, Lee said.

The Lake Worth Beach option would require installation of distribution mains through that city and construction of two new subaqueous crossings and connection points on the southern end of Palm Beach, Lee said.

The cost is estimated at $263 million to $295 million, according to Kimley-Horn.