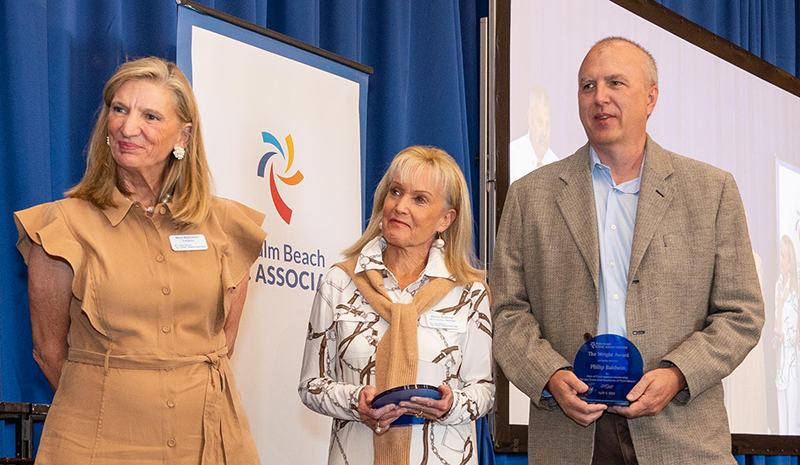 The Palm Beach Civic Association honored two members of its communications team Monday for their courage in reporting on the Covid-19 public health emergency.

During the early, pre-vaccine days of the pandemic, Rutledge and Baldwin consistently ventured beyond the call of duty, risking exposure to the coronavirus while reporting on events or information they gathered from the field, said Fire-Rescue Chief Darrel Donatto, who presented them with their awards.

“Everybody was scrambling for information and trying to make decisions that literally meant whether they would live or die,” Donatto said. “Wendy Rutledge and Philip Baldwin stepped up and provided everybody in this town with that information. They were extremely diligent in weeding out what was real and not real … There was never a time when they said ‘no.’”

Their Palm Beach TV reports can be viewed on the Civic Association’s website, palmbeachcivic.org.

Named after Civic Association Chairman Bob Wright, the award is given each year to members of the community who have demonstrated outstanding leadership during periods of time that are critical or marked by disruptive change.

“Their expertise and knowledge have greatly enhanced our communications and our mission – to enhance the quality of life in Palm Beach,” Robosson said. “They are so deserving of the Wright Award.”