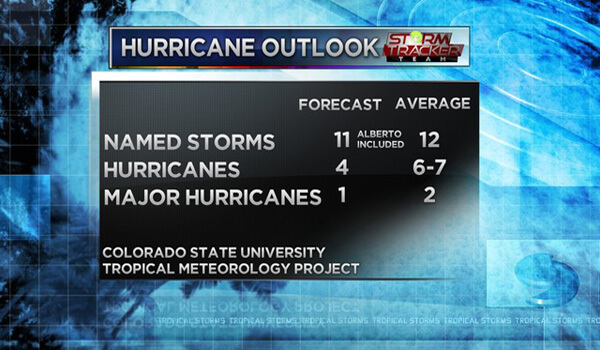 Including May’s Subtropical Storm Alberto, 11 named storms, four hurricanes and only one major hurricane of Category 3 or higher intensity are expected this season in CSU’s latest outlook released Monday.

This is a significant reduction from its May 31 outlook, which had called for 14 total named storms, six hurricanes and two major hurricanes.

Hurricane forecasters have lowered their projections for the 2018 season, saying they expect fewer hurricanes to form, and dropping the probability that a major hurricane will make landfall along the U.S. coastline or in the Caribbean.

The Colorado State University team said Tuesday it is predicting 11 named storms, of at least tropical storm strength, with four becoming hurricanes and just one becoming a major, of Category 3 or higher on the Saffir-Simpson Scale, with top sustained winds of at least 111 mph.

The team’s start-of-season forecast on May 31 had called for 14, six and two, respectively. The historical average is 12, 6½, and two.